JOURNAL OF INTERDISCIPLINARY STUDIES
Vol. XXXII 2020
THE DIGITAL CHALLENGE:
HOW TO HUMANIZE TECHNOLOGY 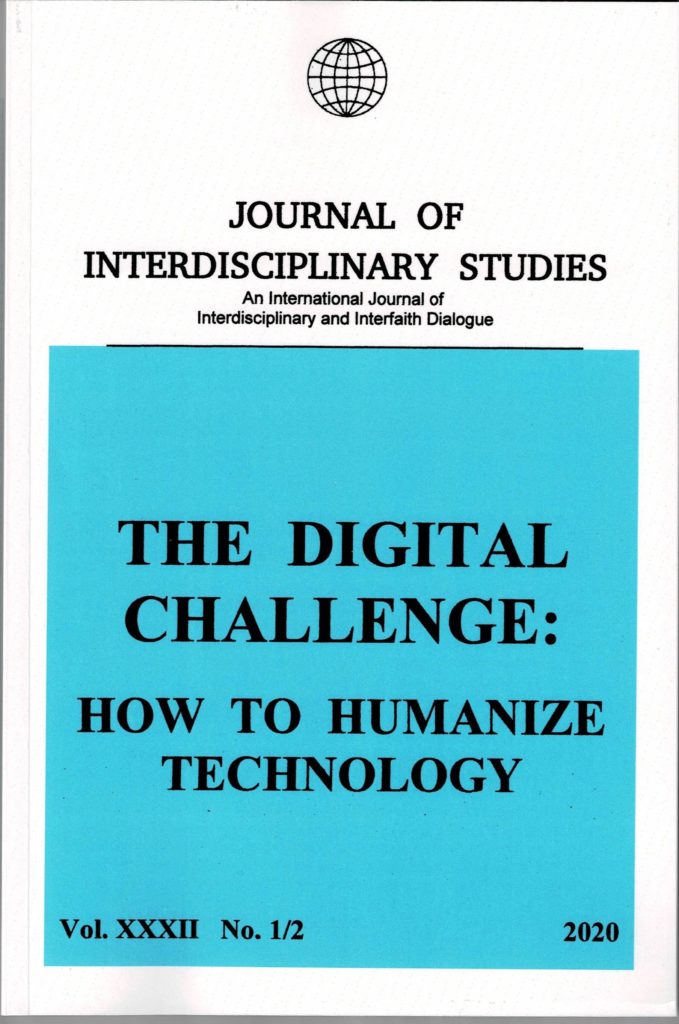 This essay explores the digital challenge, how to humanize technology, and the need to rethink the digital-human divide. This is imperative in view of superintelligent AI, which may escape human control. The information age poses quandaries regarding the uses and abuses of technology. A major critique concerns the commercial design of digital technologies that engenders compulsive behavior. All technologies affect humans in a reciprocal way. The new digital technologies–from smartphones to the Internet–where humans are tethered to machines, can impair our autonomy, hijack attention, rewire the brain, and diminish concentration, empathy, knowledge, and wisdom. The remedy is to restore deep reading, human interactions, personal conversations, real friendships, and respect for autonomy and privacy, building a nurturing culture of tolerance coupled with transcendent norms and ideals worthy of a creature created in the image and likeness of God. This aspiration should be at the center of a new interdisciplinary field of inquiry–a phenomenology of communications.

“USELESS” CLASS OR UNIQUELY HUMAN?
THE CHALLENGE OF ARTIFICIAL INTELLIGENCE

This essay explores recent developments surrounding the Fourth Industrial Revolution, particularly as they relate to the challenge of technological unemployment. In an age of advanced robotics and artificial intelligence (AI), so warns the philosopher-historian Yuval Noah Harari, ordinary people may become unemployable, unable to contribute to society, and therefore be declared a “useless class.” In contrast to such a dystopian view, futurists like Ray Kurzweil and Nick Bostrom envision a digital utopia, while more realistic optimists emphasize that AI will ultimately create more jobs than it destroys. As an alternative to these perspectives, this essay proposes a Judeo-Christian approach that, independently of traditional frameworks of paid work, affirms the unique value and dignity of all human beings by highlighting the theological significance of human creativity, the balance between work and play, love as an overarching framework for life, and the role of human beings as ethical decision-makers.

With the varied learning formats found in education, one constant that has remained is keeping the students on an honest path regarding how they obtain their degrees. This essay probes how students have developed creative cheating styles to coincide with the advancement in technology. The core of the issue is student integrity, and one way to address it is on the very ground of the problem. Along with the creativity of technology and the ability to cheat, Isaac Asimov’s “Rules for Robots” may be rewritten as rules for humans. How machines are programmed is the equivalent of how students are educated, that instead of pursuing a grade unfairly through technology, students may be taught the positive points of the rules that Asimov developed, the outcome being not to use technology for selfish ends. Rather, the desired outcome is to educate students to value technology as the aid that it is for a properly earned grade.

THE VIRTUES OF LEONHARD EULER:
ETHICS, MATHEMATICS AND THRIVING IN A DIGITAL ERA

This essay explores ethical foundations for meeting the digital challenge via a case study of the work, life, and virtues of the greatest mathematician and natural scientist of the eighteenth century, Leonhard Euler. By biography and history one can learn of the gifts of human strength, practices, good will, dependence on others, and friendships which made possible Euler’s own astonishing corpus of work and that of many other scientists and mathematicians, engineers and technologists. Digital technology results from a combination of science (demonstrable knowledge and method), technology, engineering, and art (forms and artifacts of making and expressing), and mathematics (abstract numerical, algebraic, geometrical, formal, and digital concepts, rules, representations, and logics). Joint reflection on the biographical, historical, and natural sources of mathematics and the digital is essential for any humanization or ascesis in response to the perils and promises of digital technology for human thriving. As ethics enable and embody an ethos, so technologies are means and manifestations of a telos. Thus, thought and action for thriving through the digital needs to contemplate and conciliate the ends of humans and of the digital.

THE CHALLENGES OF DIGITAL TECHNOLOGIES
FOR NIGERIA

The world is saturated with information and communication technologies that have changed the way people work and connect to one another. These technologies play a great role in people’s interactions, their pursuit of education, and certain careers in life. For some scholars in the developed world, the era of the digital revolution is over; it is now the post-digital era. However, for a developing country like Nigeria, though digitalization is seen as a necessity, there are still many challenges hindering its progress. Digital technologies are perceived as a double-edged sword with positive and negative impacts. Apart from the digital divide, some of these technologies have been abused or misused. Hence, part of the humanization process for Nigeria with its complex historical-cultural context would entail addressing the challenges surrounding these technologies, aspiring to reduce their capacity to dehumanize. More people need to have access to and be educated on how to better understand and wisely use such technologies. The process of dealing with these challenges must involve the partnership and collaboration of government agencies, academia, and civil societies.

Kurt Gödel is well-known as a first-class logician-mathematician, but less well for his proof of God. Gödel’s Incompleteness Theorems proved that all formal axiomatic systems have inherent limitations. He created also “Gödel numbering,” a special code for writing mathematical formulae. His proof of God was presented logically on the basis of modal axioms. Gödel was sure of God’s personal influence and believed in eternal life of the human soul. He was more than only a “Baptized Lutheran” whose belief was “theistic.” Yet Gödel’s individual assurance of God’s “personal existence“ cannot be viably presented on an interpersonal basis being a “first-person“ type of knowledge and, thus, outside interpersonal conditions for an objective construction beyond a “verbal proof.“ There are categories of reality not easily translatable without a shift in their meaning or a simplifying reduction. The metaphor of an analogy between the brain and its mind as against a computer’s hard- and software does not adequately consider the polarity between the message and its meaning. Gödel’s God was not a modally conceived formal-logical abbreviation of something unattainable for the believer, but a personal Security which does not require any proof.

THE PARADOX OF KURT GÖDEL:
A RESPONSE

Miloš Dokulil’s dissection of Kurt Gödel’s religious views generates questions among his conclusions. In part, the reader’s understanding is challenged by the turgid translation from the Czech language. Yet, the meaning still can be extricated. Because Gödel’s ontological argument for God’s existence was not published in his lifetime, there is doubt that he was satisfied by its method. Truly, since virtually all of Gödel’s writings on philosophy were unpublished, his rational Platonism leaves considerable room for speculation concerning his metaphysical system. Hence, Dokulil seeks alternative explanations for what seems to have been Gödel’s real faith in God. Framed by semantic-philosophical musings, Dokulil concludes that it was the influence of Gödel’s childhood exposure to the Bible mainly through his mother. Indeed, it seems at times that Dokulil is examining his own belief in God as well as Gödel’s. In the event, there are several aspects of Gödel’s life and work which elucidate his religious belief through his pursuit of mathematical reasoning in a more intellectually engaging way than simply the maternal influence that is often most profound and Godly. These include his philosophy of Platonism, great contributions to metamathematics, and the relation of intellect and will.

THE CHALLENGE OF DISTANCE LEARNING:
AN EDUCATOR’S JOURNEY

This essay explores the sudden shift from residential higher education to remote learning in the United States, a consequence of the novel coronavirus. It is a personal account of experiences as a professor at a Midwestern university. Many instructors had no training in online teaching. For university faculty, Covid-19 meant having to transform courses from in-person instruction to a remote platform practically overnight. Among the student comments I received were that I managed the online transition well. Over the next academic year, 2020-21, universities face challenges in resuming on-campus teaching, and the possibility that a new outbreak of the virus might bring a repeat of the Spring 2020 semester. Although that possibility sounds dire, there is hope that the shift to remote learning may offer a silver lining in the form of expanding course offerings beyond geographic areas and reaching a wider audience. For liberal arts institutions that are struggling financially, a rise in the use of remote learning and online education may offer a new beginning, and for public universities, potential new revenue given declining state support, a silver lining.

Affirmative action and the decline of merit-based admissions was the beginning of the decline at Harvard University, as it was at most universities. This essay seeks to determine what has happened to the rest of academic first principles as a result, to academic freedom, scholarship, and student/faculty culture. To determine this progression requires decades of observation. The results of this investigation between 1969 and 2019 is that all of these university functions, in succession, were severely compromised, and that the token Asian student lawsuit that was heard against Harvard in 2018 has had no effect on this progressive decline. Recovery may have to come from outside the university. A beginning solution would come from a definitive ruling from the U.S. Supreme Court on the appeal of the Asian student lawsuit. Other areas that the present Harvard system of social justice are vulnerable to are the growing financial dependence on global executive education, the increasingly contradictory professorial and departmental policies regarding academic freedom, and, ultimately, the selection of other educational forms produced by diversity.

Today, the earth is an interconnected globe humming with electronic transmissions–a chattering planet nestled in the provident silence of space. The ethical question is whether this is contributing to authentic human development and helping individuals and peoples to be true to their transcendent destiny. The new media are powerful tools for education, cultural enrichment, commercial activity, political participation, intercultural dialogue and understanding. They also can serve the cause of religion. Yet the new information technology needs to be informed and guided by solidarity in the service of the common good bridging the digital divide within and among nations. The value-laden message of Western secular culture to people and traditional societies in many cases ill-prepared to evaluate it leads to widespread crisis, for example, in regard to marriage and family life. This technology can be a means for solving human problems, promoting the integral development of persons, creating a world governed by justice, peace, and love. It also can help men and women in their age-old search for self-understanding. Like today’s world itself, the world of media, including the Internet, has been brought by Christ, inchoately yet truly, within the boundaries of the kingdom of God and placed in service to the word of salvation.