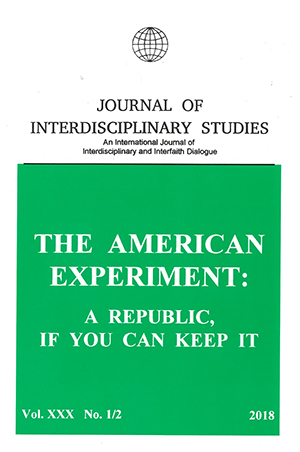 THE  AMERICAN PROMISE:
LIBERTY AND JUSTICE FOR ALL (Editorial)

This 30th anniversary volume in the interconnected thematic series of the Journal of Interdisciplinary Studies celebrates the American experiment in self-government. The essays explore contemporary dilemmas of a representative democracy with particular emphasis on the First Freedoms–freedom of thought, speech, press, assembly, association, as well as political, philosophical and religious persuasion. The American founding provides the inspiration epitomized by the U.S. Declaration of Independence, the Constitution, the Bill of Rights, and debates at the 1787 Constitutional Convention that prompted Benjamin Franklin’s famous reply to an inquiry concerning what was accomplished, “A Republic, if you can keep it.” The essays revisit the Founders’ priority of liberty expressed in constitutional guarantees of individual freedoms and the quest for the common good that constitute the uniqueness of American exceptionalism. The central unifying theme is a focus on freedom of conscience and freedom of religion, along with reconciling particular interests (factions) with the common good. The major challenge in a postmodern era that brackets God and Absolutes is to find sources of the American promise of “liberty and justice for all.”

THE  FIRST FREEDOM:
RELIGION IN THE AMERICAN REPUBLIC

The Founders of the United States had waged a war in the name of liberty. Yet shortly after independence they discovered, with the Articles of Confederation, that liberty did not make for a durable Republic. So they crafted the United States Constitution to form a more perfect union. Well aware of how flawed human nature is, they created a strong republican government with three co-equal branches overseeing a union of states, each ruled by laws passed, executed, and judged by their democratically elected representatives. Religious freedom was a particularly thorny issue; institutions of religion are where people exercise freedom of conscience. Religions form powerful interest groups, motivated by high ideals, but are corruptible, sometimes unrealistic, and often inflexible as to how their ideals are to be lived out in society. America’s Founders followed the hard road of refraining from either endorsing or restricting any establishment of religion, but submitting religious individuals to the rule of law. The courts have had to sort out how those ideals are to be applied in actual cases ever since.

This essay surveys the history of American media from the colonial era to the present. It focuses on the First Amendment protections of press freedom, the nature and consequences of media bias, and the modern tendency at media consolidation via corporate mergers reducing the number and variety of media voices. Actually, these three elements are intertwined rather than independent. The government tried, without lasting effect, to regulate media through Sedition Acts, libel suits, prior restraint, the Fairness Doctrine, and net neutrality. For most of America’s history, media bias was presented up front by publishers so readers knew exactly what to expect. However, over the past quarter century, mainline national media have become increasingly ideological so that objectivity or the pursuit of truth may be seriously questioned. Media mergers have been about profits yet they effectively concentrate control of news outlets in fewer and fewer hands.

A remarkable political figure, John F. Kennedy contributed also to political theory focusing on community, sacrifice, and effective national leadership. Coming of age in the build-up to World War II, Kennedy’s early views were framed by the inability of Western democracies to meet totalitarian challenges. As his political career developed, JFK maintained a stance favorable to strong national leadership as a way of overcoming the individualism and self-centered aspects of modern life. A keen believer in service, community, and sacrifice, his famous “Ask not” moment of his 1961 Inaugural Address was informed by a concern with renewing American democracy. With a weakening of the social contract and increased political dysfunctionality in the twenty-first century, the political thought of the thirty-fifth president still speaks to us with its emphasis on courage, leadership, civil society, and the quest for national unity.

A NEW POLITICAL PACIFISM:
CHURCHES IN THE WAKE OF THE GREAT WAR

In the aftermath of the carnage of World War I, a politically engaged pacifism spread rapidly among a number of traditionally non-peace churches, and among the populations of England and America. This pacifism meant to be effective in the world, and it was: it swayed the democracies of England and America to adopt many of its policies. It meant to achieve peace and end war. Represented as what Christian love requires in political life, it failed utterly and completely in its aims both as political prescription and understanding of Christianity. The relevance of this essay is that many of the erroneous assumptions and failed policies of the church peace movement of the 1930s appear to be still the assumptions and policies of secular statesmen of the present. The errors of the political pacifists live on, and if they are not corrected, the consequences are likely to be the same, or worse, for next time, unless we are wiser than the last, the evil ones may prevail .

FAMILY, RELIGION AND THE AMERICAN REPUBLIC

Indications are that the success of the American experiment is fading. Perceived declines in family and religion are of particular concern as key aspects of civil society. But family and religion are difficult to measure, and it is challenging to have clarity about our own times and the past. The 1950s are commonly seen as the end of a long run of success for religion and family in America. Yet marriage and family have consistently gone through cycles of growth and decline. Thus, post-World War II religion was more “civil religion” than Christianity. To gain perspective on the past and envision the future, this essay revisits two classic books: Carle Zimmerman’s 1947 study of the family and Will Herberg’s 1955 study of religion. Zimmerman describes a decline in family structure that seems to fit the last 50 years. But other literature indicates that we may be at the trough of a cycle in family structure. How much does family structure matter to society, and what is the future of the family in America? Herberg describes religion as largely a way of “belonging”–more cultural than religious. How do cultural and “religious” dimensions contribute to the health of a society? Without vibrant religious faith and strong families, can we keep the republic?

CIVIL RIGHTS IN AN EXTENDED REPUBLIC:
MULTIPLICITY AND COMPETITION,
NOT GOVERNMENT PREFERENCE

It is now apparent even to traditional civil rights advocates that the well-meaning effort to be inclusive has degenerated into identity politics and its violent offspring in universities, the judicial system, and public education. Reviewing these institutions, it is necessary to return to what civil rights were intended to be, to their inherent part of the original “extended republic” concept used by James Madison. Prior to the U.S. Constitution, republican forms of government were considered appropriate only for limited, homogeneous populations, or city-states. The extension to a large republic in terms of population and land area, to multitudinous factions, was Madison’s greatest contribution to the Constitution and the long-term “exceptionalism” of the U.S. republic. The widely-held belief that attention to minorities began in the 1960s with the “Civil Rights Revolution” is wrong as demonstrated by the extended republic’s dependence on them and its success. The multiplicity and competition of factions, sects, and interests, the greater the multiplicity the greater the security, was the reason for this success, and government interference was considered harmful to this end. To help us return to that concept is the purpose of this essay.

POLITICAL POLARIZATION AND THE CHURCHES:
TOCQUEVILLE ON RELIGION, DEMOCRACY
AND THE FUTURE OF CHRISTIANITY

Critics decry what they see as an odd association in the 2016 election of Donald Trump and evangelical Christians who emerged as his most reliable base of support. Yet President Trump’s popularity among evangelicals is not as remarkable as it may seem given the often-paradoxical relationship between religion and politics in the United States. Alexis de Tocqueville’s warnings about the vulnerability of American Protestantism’s prophetic voice to individualism and materialism may help to explain Trump’s status as a “religious” president. Polls suggest that security concerns have eclipsed moral issues in importance for many American Christian voters. Such a transformation, Tocqueville believed, would undermine the nation’s moral foundations. This concern led Tocqueville to admire the American principle of church-state separation and voice support for something akin to the “Protestant Principle,” which promotes maintenance of prophetic distance between religion and politics to morally ground democracy.

THE CONSTITUTION OF 1787,
BASED ON REASON AND REVELATION

The framers of the U.S. Constitution of 1787 understood that its principles are those of the Declaration of Independence, based upon reason and revelation, “the laws of nature and nature’s God.” Yet, following so-called progressivism at the turn of the twentieth century, the principles of the American founding were questioned by historicism and moral relativism in the social sciences and humanities, with the most egregious effects today in constitutional law. This has been called “the crisis of the West.” Some perceive that the United States lacks a strong moral foundation, and call for redrawing the Constitution. However, before doing so, we may want to better understand its founding principles. We need to turn to the principles of the Declaration of Independence, as found in reason and revelation, which support the moral order of the Constitution. John Quincy Adams and Abraham Lincoln referred to passages from the Bible to illustrate the preeminent position of the Declaration to the Constitution. And they, like the founders, believed the Constitution’s principles must be adhered to for the nation to survive.

THE REPUBLICAN SCHOOLMASTER
AND THE PROBLEM OF RELIGION IN AMERICA

There is a view that the U.S. Supreme Court has acted as a “republican schoolmaster,” defining and educating the public on the permissible interaction between government and religion. The Court gave government, especially state governments, considerable latitude until incorporation of the religion clauses in the 1940s. In Everson v. Board of Education (1947), the Court articulated a rigid conception of church and state which set precedents for decades. Those precedents restricted accommodation to religion by government, based on an incomplete reading of the Founding debates on religion. It has been gradually corrected since Justice William Rehnquist’s dissent in Wallace v. Jaffree (1985). The implications of the separationist interpretation have had consequences that remain. The most obvious being forestalling experimentation with school choice for non-public school students and precluding the use of public facilities for religious groups until a series of corrective rulings beginning, for the most part, in the 1990s. The republican schoolmaster is now accountable for the intellectual lineage it uses.

JOURNAL OF INTERDISCIPLINARY STUDIES Vol. XXIX 2017 THE FUTURE OF RELIGION: Re-Enchantment of the World?…

JOURNAL OF INTERDISCIPLINARY STUDIES Vol. XXXIII 2021 SOCIAL MEDIA & THE SELF: THE PROMISE OF…